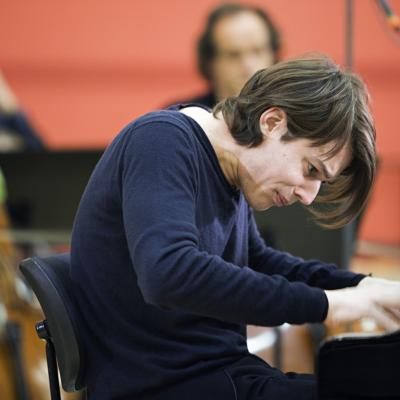 David Fray’s sparkling talent is such that he is one of the few pianists of the new generation to have signed an exclusive recording contract recently with one of the current majors, Virgin Classics. In January 2008 he recorded a programme entirely devoted to Bach, comprising four concertos for keyboard and orchestra. For the public these concertos are among the most popular and stimulating of Bach’s works. For David Fray one of the major problems facing the contemporary performer of these works is that they have been “visited” by Glenn Gould. In other words, the objective is to find a way of playing Bach after Gould. By copying him? By standing resolutely apart? The film follows David Fray in his attempt to approach these beautiful works in a highly personal way. In the simplest manner, three situations provide the film‘s setting: David Fray at home working at the score on the piano, explaining the many options open to him, with many examples drawn from the three concertos selected. We then see David Fray rehearsing and recording with the Deutsche Kammerphilharmonie Bremen, which he conducts from the piano. The film alternates rehearsal and recording sessions of the three concertos, movement by movement, intercut with short interviews.