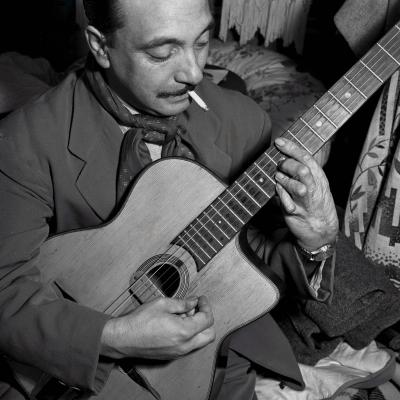 This documentary tells the story of the extraordinary and legendary life of the man who is referred to as the greatest jazz guitar player of all times: Django Reinhardt. The film introduces us to those who worked with him, lived with him and loved him. It shows us how his mutilated left hand becomes a major asset of his musical creativity and later his discovery of jazz through Louis Armstrong’s work. It takes us to his encounter with the violinist Stéphane Grappelli to the creation of the Quintette du Hot Club de France, from the luxurious years to his American disillusions. And finally, it depicts his famous flights to his sudden death on the banks of the Seine. We hear his friend Stéphane Grappelli’s loving words, Jean Sablon’s unusual anecdotes, Boris Vian’s regrets, Henri Salvador’s fantasy. All these interviews come from archive footage and articles, but also, alive, from the people still able to talk with emotion about Django: drum player Roger Paraboschi, pianist Martial Solal, composer and violinist André Hodeir, saxophonist Jean-Louis Chautemps. We see how Django’s legend was born, carried along by these encounters illustrated by a subtle mixture of archives, interviews, photos, and original cartoons. Old recordings bring Django’s music back to life and punctuate the story, introduced by one of his most legitimate heirs: his grandson and guitar player David Reinhardt.