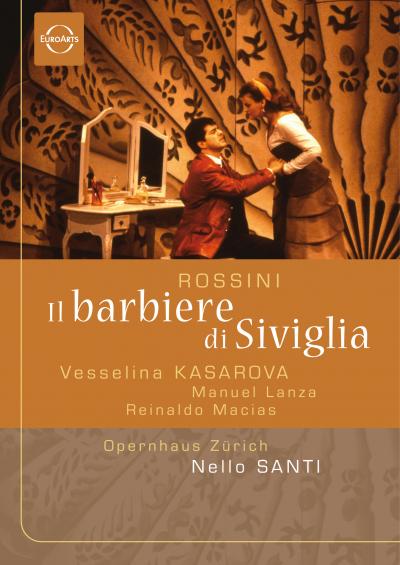 The press enthusiastically declared this Barber of Seville a “firework display of exhilarating comedy” and praised the "unforced liveliness" of the cast. EuroArts releases this highly acclaimed staging of one of the most popular operas ever written. Vesselina Kasarova is the undisputed star of this production – she shines musically and dramatically in the part of Rosina, one of her signature roles, which she has since been invited to sing in many major opera houses from Vienna to New York.
Recorded live at the Zurich Opera in April 2001, the cast was led by Manuel Lanza as Figaro, Reinaldo Macias as the Count, Carlos Chausson as Bartolo and Nicolai Ghiaurov as Basilio and Nello Santi, a “singer-conductor” in the best Italian tradition, roused his orchestra to precise, vivacious performance.
An audiovisual feast that guarantees a wonderful night-out-at-the-opera experience for the home viewer!