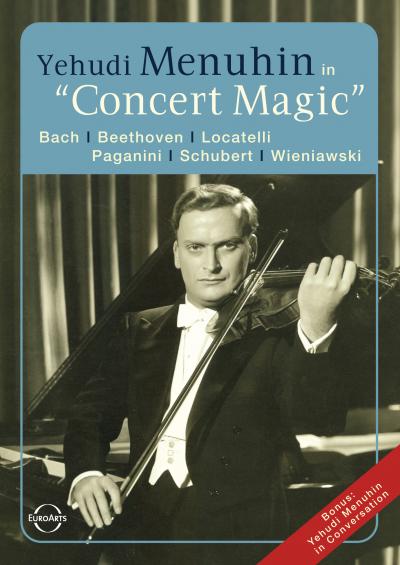 The great master violinist Yehudi Menuhin (1916 – 1999) joined a group of friends at the Charlie Chaplin Studios in 1947 to record the legendary Hollywood music film, “Concert Magic”. This DVD releases the film for the first time for home viewing.
When it was premiered at the Stage door Cinema in San Francisco, it was the first ever concert filmed for movie audiences. Yehudi Menuhin was 32 years old and had already climbed to enormous heights of critical success and popularity. He and the other musician played classical and romantic works for the recording.
The one hour long bonus track features “The Story behind Concert Magic”. In 1997, 50 years after the creation of the film, Yehudi Menuhin and Humphrey Burton (director of a number of Leonard Bernstein concerts and an expert biographer of Menuhin) viewed the film in front of the cameras. Menuhin recalled the making of the film in an interview and added many interesting details with regards to music, filming, artists and the idea behind it all.