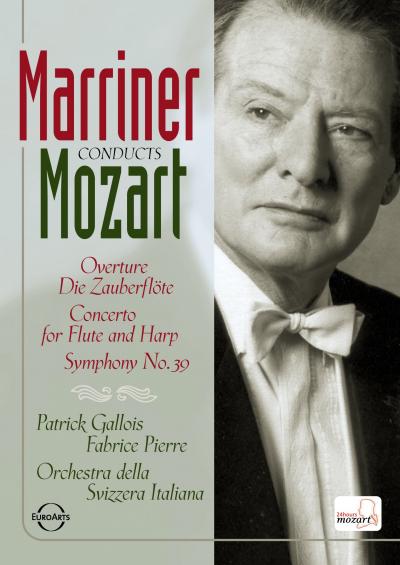 In this live recording from the Palazzo di Congressi Lugano in November 2005, Sir Neville Marriner conducts the Orchestra della Svizzera Italiana in a performance of an all-Mozart programme. On the advent of the Mozart Anniversary Year in 2006, this concert focuses on famous late works by Mozart.
Because of its cheerful, lighthearted mood, Mozart's Concerto for flute, harp and orchestra is one of the Austrian composer’s most popular pieces. Soloists Patrick Gallois and Fabrice Pierre have worked on their joint interpretation, providing some discreet ornamentation to Mozart’s solo lines. Mozart’s “late” masterpieces, the overture from the opera “The Magic Flute” and the Symphony No.39 in E-flat major crown this wonderful programme conducted by doyen of the chamber orchestra revival and renowned Mozart conductor, Sir Neville Marriner.