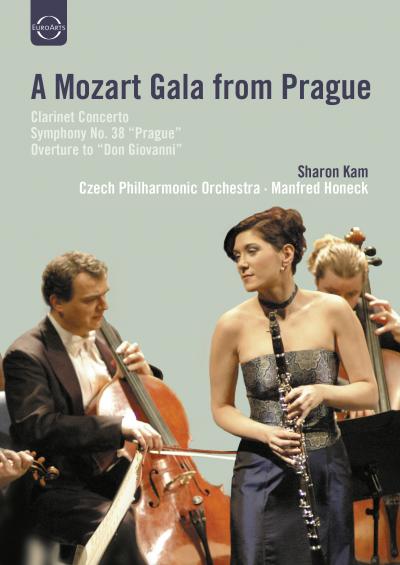 As part of the Mozart celebrations for the composer’s 250th birthday in 2006, the Czech Philharmonic Orchestra, under the baton of Manfred Honeck, perform W.A. Mozart’s most famous work related to or composed in Prague.
The young clarinetist Sharon Kam, one of the most exciting players on the international scene and a frequent performer with many renowned orchestras all over the world – plays the popular Clarinet concerto in its original version on the lower range basset clarinet.
The Prague Estates Theatre, where the concert was recorded on Mozart’s birthday on the 27th January 2006, is one of the most beautiful historical theatres in Europe. Part of its charm, magic and value lies in its historical significance, which stretches from the theatre’s role in Mozat’s career to modern times. In 1787 Mozart conducted the premiere of "Don Giovanni" here and , his friend and inspiration the clarinettist Anton Stadler, premiered the clarinet concerto in this theatre in 1791.
The DVD captures a wonderful memorial concert in state-of-the-art quality and surround sound.