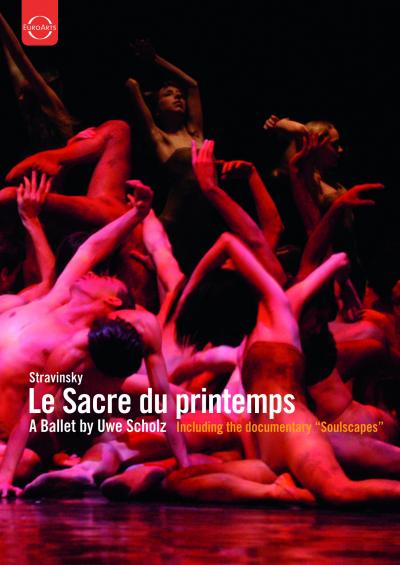 Uwe Scholz, former ballet director in Leipzig, was hailed as one of the most brilliant choreographic minds of his generation and he was certainly one of the most important German choreographers when he died in November 2004 at the early age of 45. The fragile-looking man, who had enjoyed a full dance and musical education from childhood, took up his first position as a choreographer with Marcia Haydée in Stuttgart when he was 22. He saw himself as a mixture between his teacher John Cranko and the influential George Balanchine, and the well over one hundred magically beautiful and extraordinarily musical choreographies that he created for houses such as the Opera in Vienna, La Scala, Zurich and Leipzig owe much to neoclassicism. This DVD recording focuses on the two interpretations of Le Sacre du Printemps that he created for „his“ Leipzig Ballet, the company that he led to international fame from1991to his untimely death. The evening opens with a legendary solo interpretation, danced by Giovanni di Palma to Stravinsky’s own adaptation for two pianos of his impressive “The Rite of Spring”. Often seen as Scholz’s autobiographical legacy, this choreography shows a dancer’s loneliness and despair in heartbreaking images. An emotive ensemble interpretation to the original orchestral version of the same piece forms the second half of the evening. Here Kiyoko Kimura takes on the leading role among the 56 dancers on the stage. The staging proves the ensemble to be one of the best contemporary ballet companies worldwide. Günter Atteln’s insightful documentary Soulscapes is a full-length homage to Uwe Scholz showing excerpts of his most important works. The film offers a warm and detailed account of a thoroughly fascinating life and includes some very personal interviews with a man who was consumed by his art until his last breath.