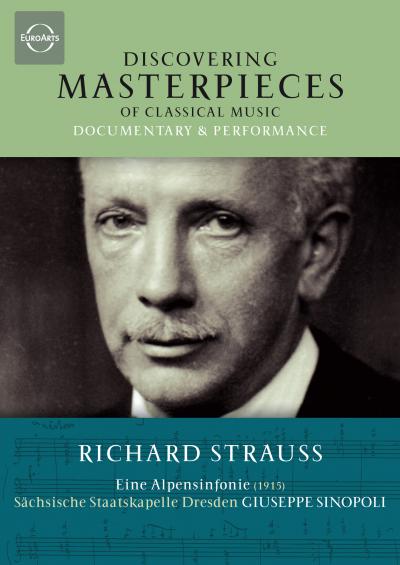 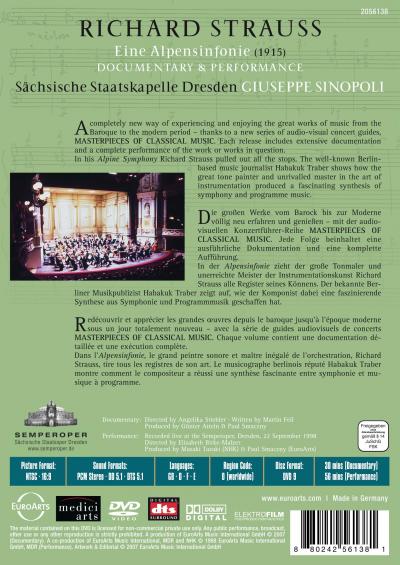 The Sächsische Staatskapelle, orchestra of the famous Dresden Semperoper gives a sample of its masterly interpretations of early 20th century music. Here they present Richard Strauss Alpensinfonie under their popular, former chief conductor Giuseppe Sinopoli (1946-2001), who died some years later tragically young. In a recording made at the wonderful Semperoper in 1998 on the occasion of the Staatskapelle’s 450th anniversary, this work features as one of the great masterpieces in the history of music in Volume VII of the 20-part DVD series “Discovering Masterpieces of Classical Music”. In his Alpine Symphony, Richard Strauss pulled all the stops in creating a musical landscape full of surprising tone-paintings. The well-known Berlin-based music journalist Habakuk Traber shows how the unrivalled master in the art of instrumentation produced a fascinating synthesis of symphony and programme music. At an attractive mid-range price, this newly edited series brings famous masterpieces to the viewer through first-class concert broadcasts and an introductory documentary. These audio-visual concert guides to highlights of classical music allow the listener to enjoy the best of music from the Baroque period up to the present day in an entirely new way. The DVD series features important orchestras, acclaimed experts, renowned soloists and outstanding conductors. Each introductory film is clearly designed and provides plenty of information. Examples from the musical score help the viewer to understand the structure of the work. The film traces the composers’ birthplaces and locations relevant to the compositions are combined with historic film material, artworks and original manuscripts, allowing the viewer to embark on a journey back to the time and place in which the work was written and informing him about the composer’s life, while providing a complete introduction to the work.