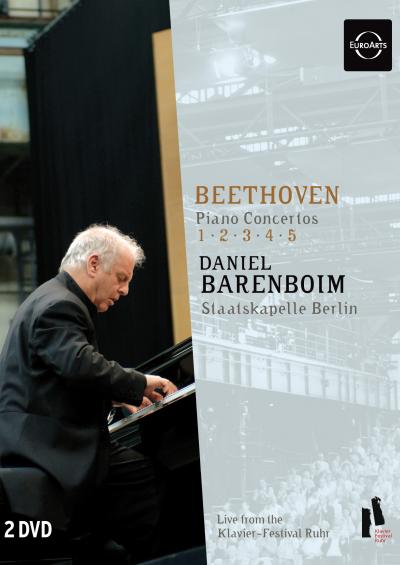 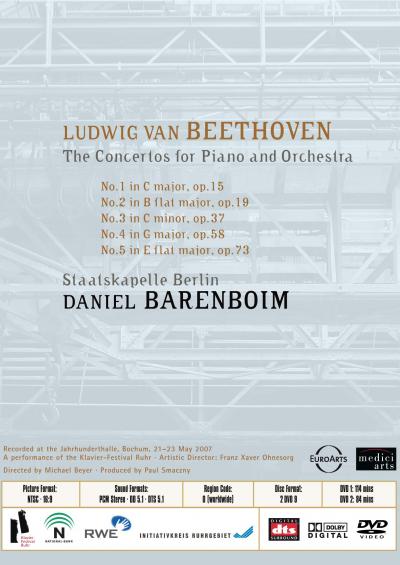 In November 2007, Daniel Barenboim completed a cycle of Beethoven's piano concertos. Recorded live at the prestigious Klavier-Festival Ruhr in May 2007, this DVD recording reflects both a very individual and special reading of Beethoven’s music and the artist’s life-long dedication to the composer. Daniel Barenboim is one of the most prolific and high-profile artists performing on international stages today and Beethoven’s masterpieces have been a key part of his repertoire throughout his career, both as conductor and as pianist. Beethoven himself was a keyboard virtuoso of almost awesome abilities who created a sensation wherever he played. It is no wonder, therefore, that the piano was central to Beethoven’s overall output. Daniel Barenboim, artistic personality and former wunderkind, long an essential part of the international musical scene both on the conductor’s podium and at the piano, is the perfect match for this demanding music. Conducting and playing at the same time, Barenboim chose his orchestra of almost two decades, the Staatskapelle Berlin, which he has praised warmly for its exceptional, dark and warm sound. With a tradition reaching back to 1570, the Staatskapelle Berlin is one of the oldest orchestras in the world. Barenboim plays Beethoven - presented in an exclusive Digipack with slipcase, this brand new recording in state-of-the-art quality brings together two musical masterminds.