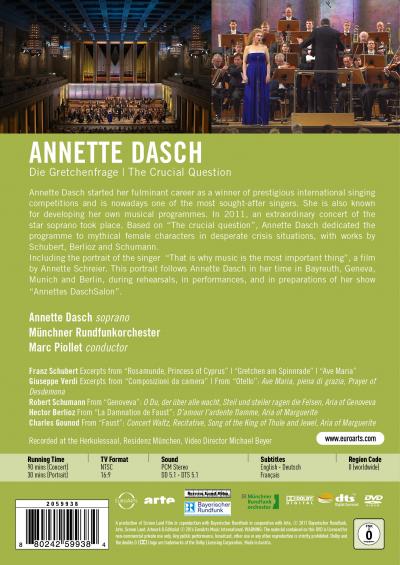 Annette Dasch started her brilliant career as a winner of prestigious international singing competitions and is nowadays one of the most-sought-after singers. She is also noted for developing her own musical programmes. The star soprano gave an exceptional concert in 2011: taking as her theme “The crucial question”, Annette Dasch dedicated the programme to mythical female characters in desperate crisis situations, with works by Schubert, Verdi, Schumann, Berlioz and Gounod. Including “That is why music is the most important thing”, a portrait by Annette Schreier. The portrait follows Annette Dasch in her special season 2010/11 – with important debuts and changes in her privat life – in her time in Bayreuth, Geneva, Munich and Berlin, during rehearsals, in performances, and in preparations for her show “Annettes DaschSalon”.