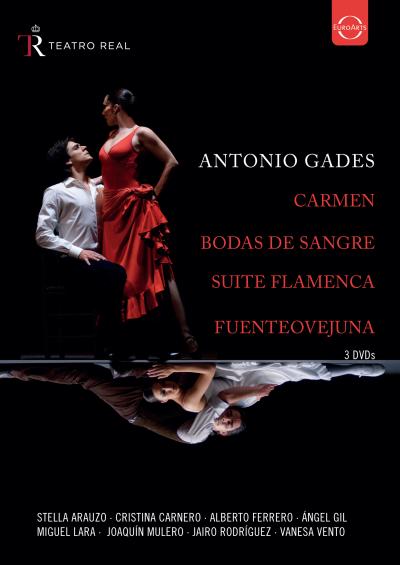 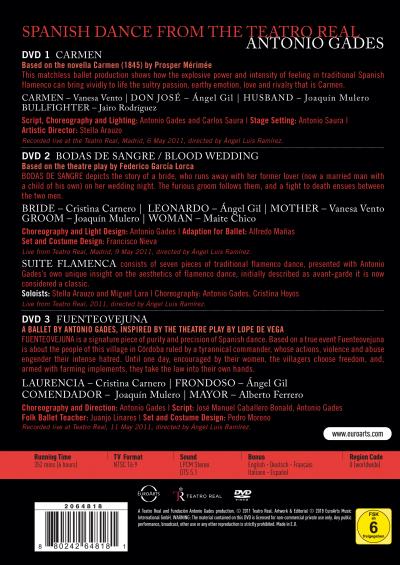 DVD 1    CARMEN (112 mins)
Based on the novella Carmen (1845) by Prosper Mérimée
This matchless ballet production shows how the explosive power and intensity of feeling in traditional Spanish flamenco can bring vividly to life the sultry passion, earthy emotion, love and rivalry that is Carmen.

DVD 2    BODAS DE SANGRE / BLOOD WEDDING (134 mins)
Based on the theatre play by Federico García Lorca
BODAS DE SANGRE depicts the story of a bride, who runs away with her former lover (now a married man with a child of his own) on her wedding night. The furious groom follows them, and a fight to death ensues between the two men.

DVD 3    FUENTEOVEJUNA (106 mins)
A ballet Antonio Gades, inspired by the theatre play by Lope de Vega
Fuenteovejuna is a signature piece of purity and precision of Spanish dance. Based on a true event Fuenteovejuna is about the people of this village in Córdoba ruled by a tyrannical commander, whose actions, violence and abuse engender their intense hatred. Until one day, encouraged by their women, the villagers choose freedom, and, armed with farming implements, they take the law into their own hands.