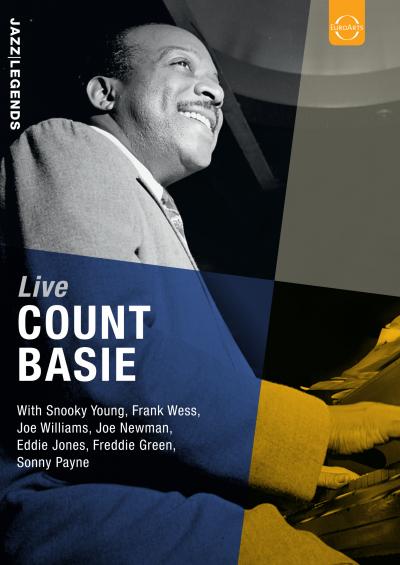 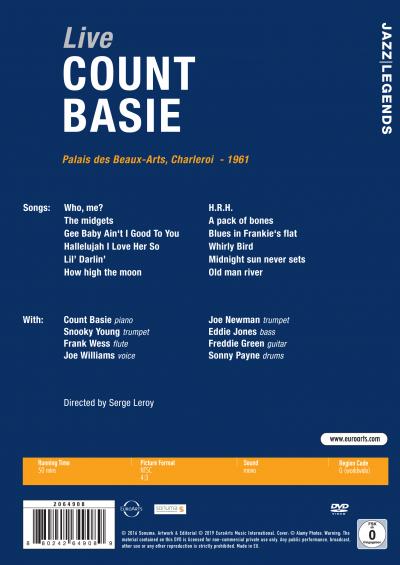 This concert recording from 1961 is one of the last recordings with two outstanding musicians from Basie’s band, Joe Williams and Joe Newman, who both departed from the band in 1961 to pursue solo careers. Joe Williams, known for having a deeper and darker voice than Billy Eckstine, regularly rejoined the band for reunion concerts. As the last of Basie’s classic trumpeters with a style very clearly influenced by Louis Armstrong, Joe Newman left the Basie Band in 1961 for good.

Freddie Green, part of Basie’s band since the 1930s and Eddie Jones were part of the classic Green / Page / Jones rhythm section that was particularly known for its tight sound, because no instrument was louder than the other. It was this very rhythm section that in the years between 1937 and 1949 helped shape the Kansas City sound and brought it to such perfection that the Basie Band itself became synonymous with the Kansas City sound.

Green, one of the few great names of Jazz guitar, had been a permanent part of Basie’s outfits for many decades – with the exception of a very brief period in 1950 and he was known for his perfect timing, which earned him the nickname “Count Basie’s metronome”. It was in particular Freddie Green, who was accountable for the tight sound of Basie’s rhythm sections.

Flautist Frank Wess was less known and as many say - less gifted – as a saxophone player. He had a particular style of pre-bop phrasing that has always been likened to Wayman Carver’s style with the Chick Webb band. He had the ability to make the flute swing, and his groovy playing helped to maintain the instrument’s status in Jazz and to prevent the flute from declining as much in popularity as the clarinet.

The repertoire of this performance is a coherent combination of standards and compositions by Ray Charles, Andy Razaf and Don Redman.

Since 1958 the Basie’s band had become so popular that they went on an annual European tour and the ease with which all musicians were performing shows, how familiar they were with their European audience. This concert performance is as diverting and plain fun as it is inspiring and of virtuoso quality.