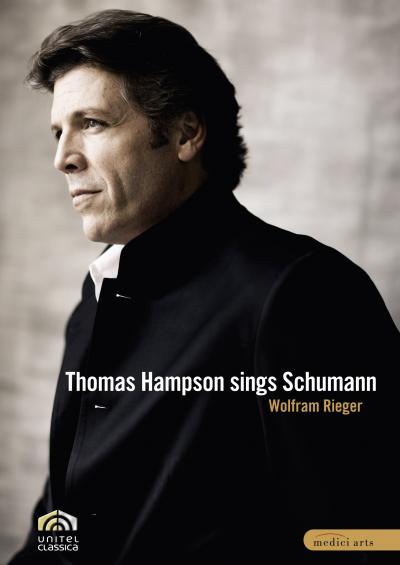 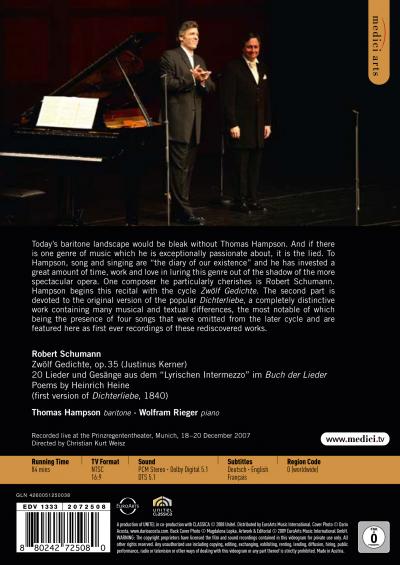 If there is one genre of music which baritone Thomas Hampson is exceptionally passionate about, it is the lied. To Hampson, song and singing are "the diary of our existence" and he has invested a great amount of time, work and love to luring this genre out of the shadow of the more spectacular opera. One composer he particularly cherishes is Robert Schumann. Hampson begins this Schumann recital, recorded at Munich's Prinzregententheater with Wolfram Rieger at the piano, with the cycle Zwölf Gedichte op. 35 on poems by Justinus Kerner. The second part of the recital is devoted to the original version of the popular Dichterliebe op. 48. While Hampson was preparing his first performance of the cycle based on poems by Heinrich Heine, he consulted the composer's manuscript, only to find that the original cycle of 1840 was a completely distinctive work containing many musical and textual differences. Among the most notable differences was the presence of four songs that were omitted from the later cycle. These works – "Dein Angesicht so lieb und schön," "Lehn deine Wang an meine Wang," "Es leuchtet meine Liebe" and "Mein Wagen rollet langsam" – are featured here as first-ever recordings of these rediscovered works.