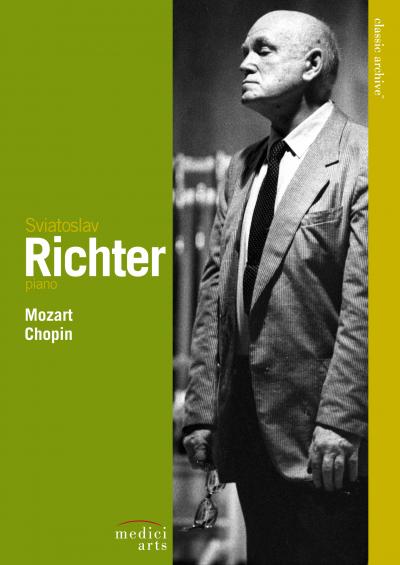 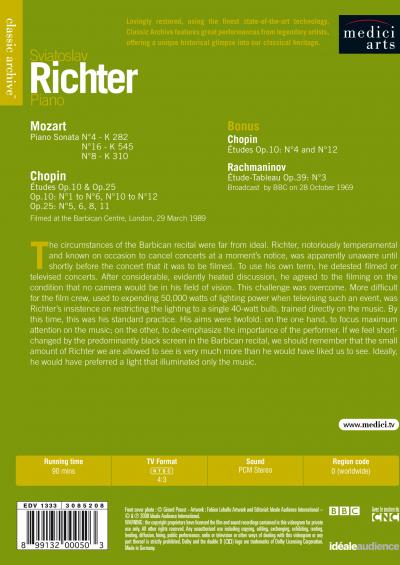 ”Classic Archive“ is a new series featuring music DVDs of legendary artists, thus offering – at a sensational mid-range price - a unique view of our classical music heritage. Sviatoslav Richter (1915-1997), who, without exaggeration, can easily be described as one of the greatest pianists of the 20th century, strictly avoided being filmed. Thus the circumstances of the Barbican recital on this DVD were far from ideal: Richter, notoriously temperamental and known on occasion to cancel concerts at a moment’s notice, was apparently unaware until shortly before the concert that it was to be filmed. After considerable, evidently heated discussion, he agreed to the filming on the condition that no camera would be set up in his field of vision. This challenge was overcome, but the film crew, used to expending thousands of watts of lighting power when televising such an event, faced a far trickier problem in Richter’s insistence on restricting the lighting to a single 40-watt bulb, directed at his sheet music, rather than at himself. This eccentric lighting was unconventional even without taking the filming into account, but at the time it was his standard practice at concerts. He aimed to focus maximum attention on the music and minimise the importance of the performer. Thus, if the viewer feels short-changed by the predominantly black screen in the Barbican recital, he should remember that the small amount of Richter we are allowed to glimpse is very considerably more than he would have liked us to see. This recital, performed in London in 1989, gives the viewer a chance to hear his wonderful rendering of Mozart and Chopin. The bonus material on this DVD adds a 1969 broadcast by the BBC in which Richter performed Chopin Études and the Rachmaninov Étude-Tableau.