Who was Jacqueline du Pré? 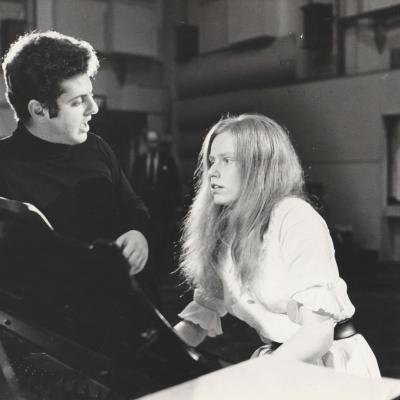 Jacqueline du Pré caught the public imagination when she was still in her teens. That happened not only because she was one the finest performing musicians that Britain has ever produced - one of the very finest - but because she had a quality that is given only to a few of the greatest artists, a quality that touched people in the way that Maria Callas did, or Enrico Caruso or Lotte Lehmann or Sergei Rachmaninoff did.
She was thought of as a golden girl and, because of her inner radiance, was thought to be a great deal more beautiful than in fact she was. So far so good. It is one of the happy stories of art reaching beyond the usual boundaries and Jacqueline du Pré has become one of the very few performing artists of the twentieth century whose reputations rose steadily from the time of their deaths. And so, she has passed into legend. But the world has an irresistible need to embellish its legends. It is a sad fact that ever since she stopped playing - in 1973 at the age of 28 - the public idea of her personality has been progressively distorted by the media and the stories have projected an image of her character that bears less and less resemblance to the real Jacqueline du Pré.
The reasons are not far to seek. They include her luminous talent when she was so very young; her ability to capture the melancholy in the Elgar concerto, as no other cellist has ever quite succeeded in doing - and at a strangely early age; her seemingly romantic career,  terminated so soon by illness, and the tragedy of her early death after 14 years of slowly encroaching paralysis. In this process the true picture of the person has been clouded and every one of the people close to Jacqueline du Pré has been appalled at the false image which has been fed into the world. We have received dozens of appeals to put the record straight. We are in what people consider to be a unique position to do that because of the films which we made with her while she was alive and well and because Christopher Nupen knew her intimately for 26 years. There is a further reason. Neither we, nor anybody else, has ever made a film about what kind of person she was. When we made the earlier films Jacqueline du Pré was such an unmistakable presence in the world that we took the personality for granted and so those films concentrate on what kind of an artist she was. The difference between them and this new project is that this one is focussed specifically on her personality because it is the image of the person that has been distorted by the legends. What this film aims to do is to present a true picture of the artist and the woman using footage of Jacqueline du Pré herself that has never been shown in public before while those who knew her best and worked most closely with her bear witness to what it was that made her so memorable a person.
The contributors include Daniel Barenboim, Zubin Mehta, Pinchas Zukerman, Itzhak Perlman, Toby Perlman, Dietrich Fischer-Dieskau, HRH The Duchess of Kent, Lady Evelyn Barbirolli, Charles Beare (who was one of her closest personal friends and who looked after all her 'cellos from the start of her career), Vladimir Ashkenazy, Hugh Maguire, Fou Ts’ong, her doctor Leonard Selby and her close friend and biographer, Elizabeth Wilson. All these people felt strongly that this film should be made, and their intimate knowledge of the subject gives a quality of conviction and enthusiasm to their personal recollections which projects a vivid picture of the real Jacqueline du Pré. There is music in the film, all played by Jacqueline du Pré herself, and all shot by us in her vintage years. None of it has ever been published before. In fact, this film consists 100% of material that has not previously been shown.