We Want the Light 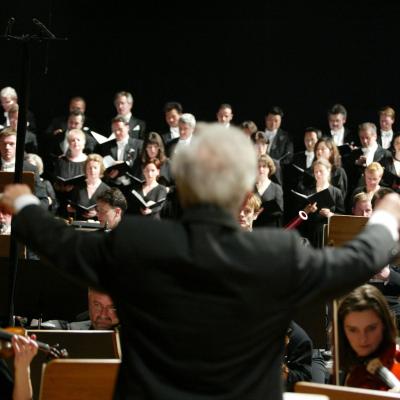 The earth on which we live silently remembers the catastrophies of our history but if we listen to the silence of the earth it will remind us of the fate of others who lived before us and from whose suffering we may yet learn.
A television film by Christopher Nupen and his Allegro Films team, which investigates the fruitful but complex relationship between the Jews and German music. The title of the film comes from a poem written by a 12-year-old girl, Eva Pickova, in the Theresienstadt concentration camp. Her words give the film both its title and its climax - in a setting for two choruses and orchestra by the American composer Franz Waxman, in his work THE SONG OF TEREZIN.
Our film is about many things. It is a film about freedom and captivity, about emancipation, acculturation and assimilation; it is about the roles played by Moses and Felix Mendelssohn in the dream of fruitful, unproblematic integration of the Jews into German society after their liberation from the ghettos; it is about Richard Wagner but, most of all, it is a film about how much music can mean to people, even in the direst circumstances, or particularly in the direst circumstances. The film looks at the high level of integration of the Jews into German cultural life in the latter part of the nineteenth century and the first 33 years of the twentieth, it touches also on some of the questions raised by Richard Wagner’s ferociously antiSemitic pamphlet Das Judenthum in der Musik (The Jews in Music) - published in 1850 and still the most aggressively anti-Semitic tract in the history of German music.
Finally, it traces some of the influences of Richard Wagner on the thinking of the Third Reich and the extraordinary place of music in the Nazi concentration camps. The film ends with the telling testimonies of three concentration camp survivors; chief among them Alice Sommer Herz who is now 100 years old and who played more than 100 concerts in the Theresienstadt camp. Most people find her deeply inspiring, not just because she has survived, in incredibly good shape, to 100 (she practices the piano for two and a half hours every day and studies philosophy at London University three days a week), it is her quiet dignity and her courage in the face of appalling suffering that touches people. She lost her husband in Dachau six weeks before the end of the war and has recently had to bear the loss of her son, a fine cellist named Raphael Sommer, who was with her in the concentration camp at the age of six. Amazingly, it is not the suffering and the tragedy that shine through but her wisdom and her extraordinary tolerance. Alice Sommer says that she has never hated and never will. She says that she is also an optimist and that these two things together explain her longevity. Her dearly loved twin sister was a pessimist, she says, which is why she died at the age of 70, “Of this I am sure. If you are a pessimist the whole organism is in a tension all the time”. She adds that she is an optimist in all things except one, “People don’t learn” she says, “They don’t learn”. Alice Sommer is convinced that it was music which kept her, and many others, alive in those unimaginable circumstances and, listening to her today, one can well believe it. In the film she plays part of a Schubert impromptu, filmed when she was 98 years old and her son, Raphael, plays part of Ernest Bloch’s Méditation Hébraïque, recorded shortly before he died.
The film also contains music by Mahler, Bach, Schoenberg, Bruch, Mendelssohn, Schumann and Wagner performed by The Gürzenich Orchestra of Cologne, The Cologne Opera Chorus and The Cologne Cathedral Children’s Choir, conducted by Vladimir Ashkenazy.