Nathan Milstein and the Bach Chaconne 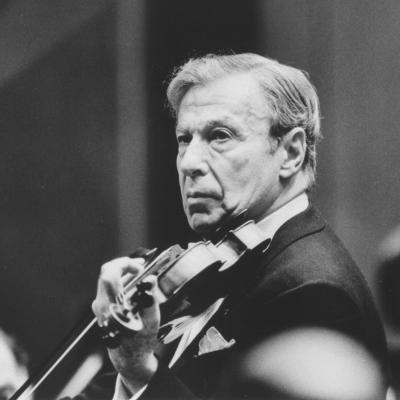 On 17 July 1986, Nathan Milstein played his last public recital in the Berwaldhallen in Stockholm. The recital included the Bach Chaconne, one of the towering masterpieces of Western music and one of the most difficult to do justice to.
Milstein was 82 years old at the time; playing the violin as nobody else has ever been able to do at the age of 82 and, in truth, as remarkably few could do at any age. He was described by the leading American critic Harold C Schonberg as “Perhaps the most nearly perfect violinist of the 20th century”. At the time of his Stockholm recital many violinists thought that he was, in fact, playing better than ever, although his music making had been a source of wonder to musicians, critics and the public alike, since he surprised Leopold Auer at the age of eleven and Glazounov at the age of fourteen. He had been something of a legend for nigh on 70 years.
This short film begins with Milstein listening to, and reflecting on, his performance of the Chaconne in the Berwaldhallen and on the piece in general, trying to decide whether his performance was good enough to be released.
He had woken, on the morning of the recital, with a painful first finger on his left hand — an essential ingredient in the equipment of every violinist. And so what did Nathan Milstein do? He spent the whole day revising his fingerings to spare his first finger — a feat way beyond the reach of most violinists. But he had been amazing orchestral musicians with his fingering changes, in mid-performance, all through his career. When the recital was over, he remarked, with some amusement, that some of what he had done was actually better for the changes.
The film ends with the complete performance, shot live, just as it happened on that memorable evening in 1986, with our 82-year-old hero further adapting his fingerings as he went along, and as can be seen in some of the close-ups. That feat alone makes this an event worth remembering but the film does much more than that: it conserves musical virtues of a very high order. It is a beacon — an important audiovisual record of a great and historic musical event.