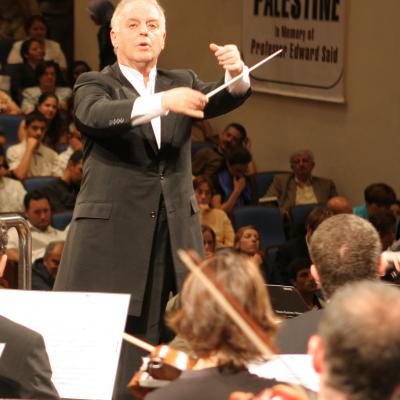 Until now a concert of the West-Eastern Divan Orchestra in Ramallah was just unthinkable, but Palestine was the centre of attraction when the West-Eastern Divan Orchestra performed there on August 21. Faced with myriad organizational and political hurdles, this orchestra of young Israeli and Arabic musicians overcame the impossible to play in Ramallah. The concert was the highlight of the six year history of the orchestra which was founded by Daniel Barenboim and Edward Saïd. The internationally respected ensemble consists of young, highly talented musicians from Israel, the Palestinian Authority, Syria, Egypt, Lebanon, Jordan, Tunisia, and Spain. The orchestra works for a dialogue between the cultures of the Middle East through the experience of playing music together. Daniel Barenboim: "The real dimension of the West-Eastern Divan will be achieved when the orchestra is able to play in all the countries that are represented in the orchestra. That means in Israel, in the Palestinian territories, in Lebanon, in Syria, in Jordan and in Egypt. When we have played in all those places, then I will feel the dimension of the orchestra has been achieved." PROGRAMME: Beethoven, Symphony No. 5 - W.A. Mozart: Sinfonia Concertante for oboe, clarinet, horn, bassoon and orchestra KV 297b