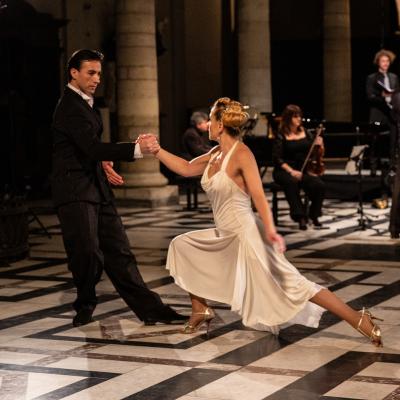 An adaptation by ASTORIA!

In 2020, ASTORIA celebrates its 15th anniversary with a recording of the MisaTango by Argentine composer Martín Palmeri: a daring mix of sacred music and tango that will plunge you into a world of intense emotions, passion and syncopated rhythms.

MisaTango or Misa a Buenos Aires ("Mass in Buenos Aires") was initially quite confidential but gained much notoriety when it was performed in Rome in October 2013, in the Church of St. Ignatius of Loyola, during the International Festival of Music and Sacred Art in the Vatican. The MisaTango was chosen that year to pay homage to the enthronement of the former cardinal of Buenos Aires who became Pope Francis in 2013, in reference to the Argentine origins of this former Tango dancer.
Created 20 years ago by the Argentinian composer Martín Palmeri, MisaTango is a choral mass on Tango sounds. It is composed on the same movements as a mass in classical Latin, in which the harmonics and syncopated rhythms of tango are mixed.

ASTORIA's arrangement brings a new energy to the MisaTango with the presence of the accordion of course but also with the offbeat voice of Jennifer Scavuzzo.