Chopin at the Opera 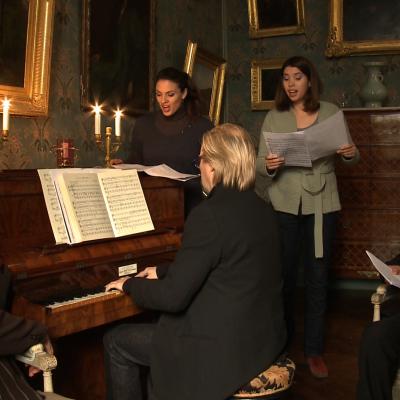 To celebrate the occasion of his 200th birthday on 1 March 2010, this film shows little known facets of Frédéric Chopin: the passionate opera fan, the admirer of the great female singers of his time, the advocate of the aesthetics of bel canto – the art of beautiful singing accompanied on the piano. For Chopin the opera represents the highest form of art, even though he never thought about writing for the stage himself. His contemporaries Bellini, Donizetti, and Rossini meant more to him than Beethoven, Liszt, or Schumann. Their decisive influence is reflected in the vocal parts of Chopin’s piano compositions. Especially the stylistic influence is applied through the flow, trills, and cadences of the coloraturas. It was the architect Adolf Loos who said: “Ornament is crime”. Yet, the ornament is also a place of improvisation, freedom, and exuberance. At the castle of Chopin’s beloved George Sand in Nohant/France, two singers, a pianist, and an actress meet with the most knowledgeable contemporary experts on Chopin and bel canto. For a whole week in late autumn, they delve into Chopin’s opera experiences: his admiration for the great bel canto singer Giuditta Pasta, his friendship with Vincenzo Bellini, and his relationship with Pauline Viardot, daughter of tenor Manuel Garcia and sister of the mezzo-soprano Maria Malibran, who, as pianist and composer, worked on Chopin’s Mazurkas for voice and piano. These Mazurkas are, as well as his pure piano compositions, rehearsed and discussed in Nohant. Particularly by means of the mezzo-soprano Katerina Hebelkova’s voice, they unfold their musical potential. By singing arias of Handel, Rossini, and Bellini, the great bel canto singer Vesselina Kasarova complements Chopin’s influencing sources of inspiration. Likewise influenced by Chopin, Kasarova seeked a singing career after studying the piano. Virtuoso she depicts the influence his piano pieces had on her singing, thereby highlighting that this aspect is for her no less important than Chopin’s influence on opera as a whole.