A Film and its Era: King Kong (Merian C Cooper) 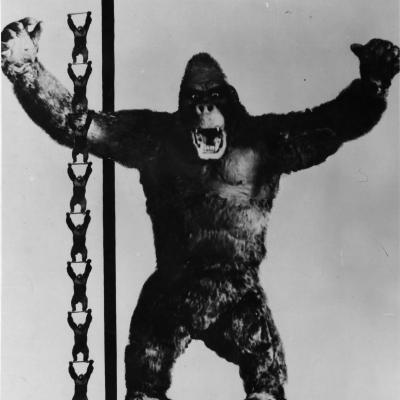 Merian C. Coopers’s ‘King Kong’ is released in 1933. Portrait of a film: a cult film in the history of movies.The impossible love story between an Indoniesan gorilla, an oversized brute straight from the dawn of time, with a sexy, out of work New York starlet. The beast becomes human, while men behave like animals. Portrait of an era: the crisis of the 1920s in Europe after the global bloodbath of the First World War and the Great Depression of ’29 create an ideal climate for the golden age of fantasy cinema. Everyone’s greatest fears are portrayed onscreen while in the real world, political monsters run free. Portrait of two directors: Merian C.Cooper and Ernest B.Schoedsack are two adventurers. Volunteer airmen in Europe during the war, they fight the Red Army with the Poles. The pair organizes expeditions and become documentary filmmakers. With their team, they make two classics one after the other, two masterpieces: The Most Dangerous Game (Les Chasses du Comte Zaroff) in 1932, and King Kong in 1933.