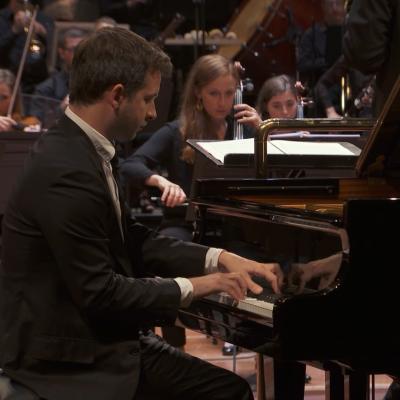 In the first concert with Renaud Capuçon, we have three masterpieces, which, although they adopt the three-movement structure dear to Vivaldi and present features that bring them closer to the Italian models, are distinguished by their contrapuntal richness, their writing density and the breadth of their developments. These qualities are particularly evident in the BWV 1042 in E major, with its extremely powerful architecture.

In these works, where the solo violin is called upon to express itself through singing rather than virtuosic prowess, there are these wonderful slow movements that are enough to crack even the most hardened non-musician. Those in the concertos in A minor and E major "offer to the bass repeated figures whose seriousness brings out the sweetness of the solo violin all the more”.

For the second concert with David Fray, Bach composed a concerti group for one, two, three and four harpsichords in Leipzig around 1730, and as director of the Collegium Musicum, he was to provide a large amount of music for an essentially worldly audience. All these concerti are transcriptions of earlier works.

In this series of six works, the double concertos must certainly be placed very high up: BWV 1062 in C minor stands out for its extraordinary polyphonic richness; BWV 1060, also in C minor, probably from a concerto for violin and oboe, and indeed very often played in a reconstruction for this pair of instruments, is another high point in Bach's concertante for keyboard.

The superb quadruple concerto BWV 1065 is not far off the same heights, and amazes the attentive listener with the skill with which the musician distributes the roles among the four keyboards to keep the work from becoming overweight.