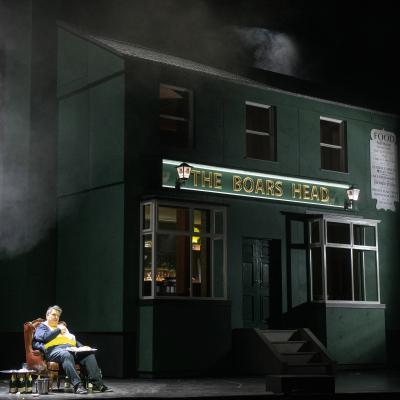 Sir John Falstaff is an anarchist who obeys only the reign of his own enjoyment, an egoist who feeds only his power-hunger and his own flesh, and who would prefer to raze the small-minded morals of his contemporaries like the walls of a fortress – by seducing two women at the same time. Needless to say, his plan is thwarted, but those trying to expose him also fail to emerge unruffled from the confusion they unleash around him – which only the audience can keep track of, barely. “Tutto nel mondo è burla,” but these jokes are only funny because falling into the abyss actually does pose quite a serious risk. Arrigo Boito, the librettist of “Otello”, distilled a sophisticated, ingenious libretto from Shakespeare’s original, driving Verdi to highly complex compositional heights.